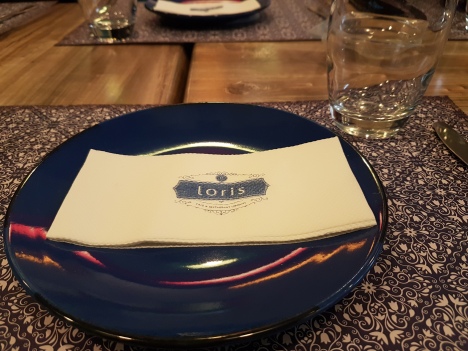 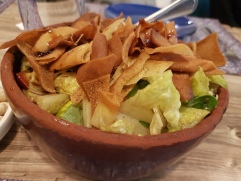 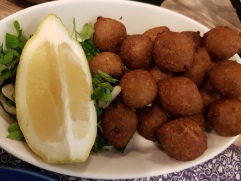 Finally, a Lebanese restaurant that awakened my taste buds! Since I began writing about my experiences at established and also more recently opened restaurants, I have been craving really good Lebanese cuisine—I left Loris satisfied. The service and the ambiance were pleasant, but a more important topic to be discussed is the food. I loved the fresh out of the oven hot bread that was served at the beginning. Their Fattouch is zesty and their Hommos is creamy. The Rkakat bi jibne had tasty melted cheese enclosed in the crispy shell, and their mini Kebbe are delicious bites filled with flavor. Their Kebab Bil Karaz is a great dish with a twist, yet it was their Lahmeh Ras Asfour Debs Rimmein that was to die for! It is the best Ras Asfour platter I have had to date; the sauce was perfectly balanced, and the meat was so tender akin to biting into a succulent piece of steak. As for the Mixed Grill Platter, the chicken was seasoned with a nice blend of spices, and the chicken, meat, and kafta were juicy and moist. For dessert, I wanted to taste the Em Ali but unfortunately it was unavailable. However, I forgot all about that when I tasted the Maamoul Bil Jibne and felt the delicate crumble fall apart underneath my teeth to reveal the softness of the cheese inside. We left Loris on a sweet note, knowing we would be returning to try more of their creations. 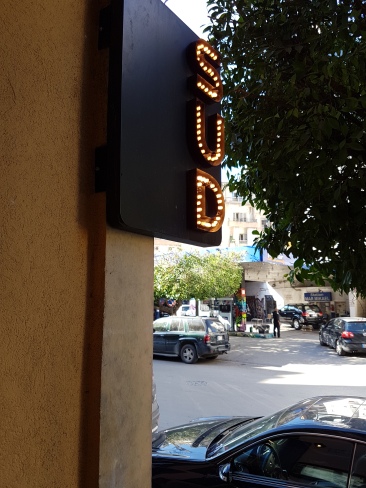 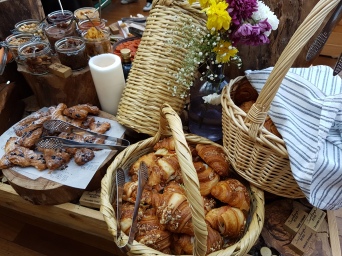 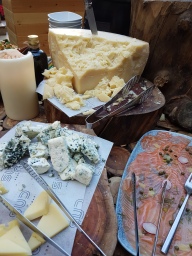 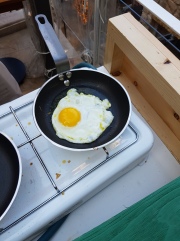 After trying SUD’s superb Fondue & Stone Grilling dinner, I was very excited to try out their famous Sundays Brunch at their Mar Mikhael branch. The service was really good as well, and the staff was friendly. There was a live D.J. playing music which was nice, although it was a bit too loud. I liked the high “ceilings”, and from where I was seated, I could look up to see the sky above me. Time to eat! At the place you get your plate and cutlery, you can have fresh juices, cold milk, and hot drinks. When I saw the colorful cereal loops, I had to have some with milk, and I also had a glass of refreshing orange juice. Then, I started off with the croissants, which were flaky and had very tasty stuffing. Their black rice salad and sauce were flavorful, and next to the salads, you can choose from a selection of cheese and hams. From the corner of my eye, I spotted the raclette—who doesn’t love melted cheese, seriously! You also have a live pasta cooking area and a stand where shawarma is ready to be served upon your request. Right next door, is a mankoushe baking section where you get your mankoushe freshly made. I opted for a zaatar and cheese one (better known as the “cocktail”); I liked the dough, but the zaatar was a tad more oily than it should be. Of course breakfast isn’t complete without eggs, and the chef happily prepares your choice of eggs and toppings; I had the sunny side up (which satisfied my constant runny yolk craving). When you can’t possibly eat savory food anymore, you know it is time for sweets. Alongside the dessert buffet, is a big tray of cheese knefe. The desserts include items such as tarts, eclairs, pancakes, fruits, and an array of candy you can place on a stick under cascading melted chocolate from an ongoing fountain. Want even more chocolate? On the side, stands a transparent cylindrical vessel holding thick hot chocolate within it. For me, that decadent hot chocolate was the best thing that I had had for dessert, then came the sort of bread pudding in a tray they had, which was moist and delicious. In general, the brunch offerings covered most of what a rich breakfast should have, but my taste buds were left partially “un-awakened” by some of them. 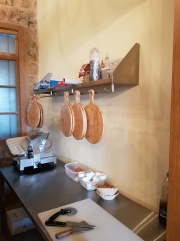 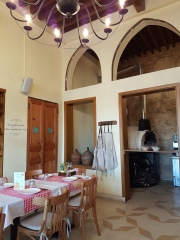 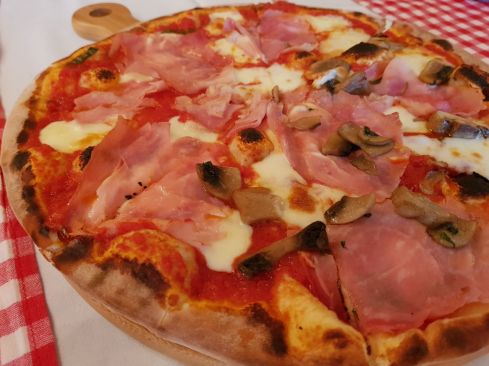 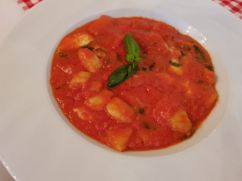 What started out as a comfortable late lunch ended with the stench of Gorgonzola, literally. We happily went to Appetito Trattoria because they cater to our youngsters by providing high chairs. The service was slow and towards the end some platters really took their time in arriving to our table. I would like to mention that the waiter was running back and forth between tables, until he was later joined by more staff.  We ordered the Siciliana and Caprese salads, the Prosciutto e Funghi pizza, the Gnocchi alla Sorrentina, the Linguine al Pesto, and the Ravioli di Capra. I will leave the encounter with the salads till the end. I would like to begin with the pizza; it was delicious. The crust was thin and crispy, and I really enjoyed the flavors. I think that if you are craving Italian pizza, this would definitely do. We ended up ordering another pizza because it was the best thing we had eaten at Appetito. The Linguine al Pesto was good and I was glad that the pasta was cooked al dente. Also, the ravioli was good, but paled in comparison to the pizza. Now back to the salads, my sister had found an unwanted visitor in her Caprese and we failed to taste the Gorgonzola in the Siciliana salad dressing (which was the thing going for it to differentiate it from a regular salad). It was appreciated that the manager really listened to our comments, and that he showed us the Gorgonzola cheese that had been used. However, it was a bit too much when he then showed us how it becomes when they process it in the mixer, and made us smell it before and after. Then, he explained how he had to change to this Italian Gorgonzola with no taste and a faint smell because customers before thought that the Gorgonzola was too strong, and it went on and on. For a change of taste and smell, we opted to try their Soffice al Cioccolato; it was alright (they were kindly offered on the house). Although I would recommend Appetito Trattoria if you are in the mood for pizza in a cozy environment, the only thing that was on my mind leaving this place was Gorgonzola.