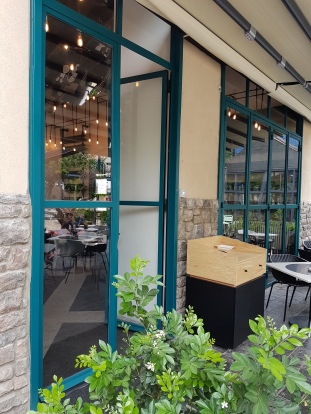 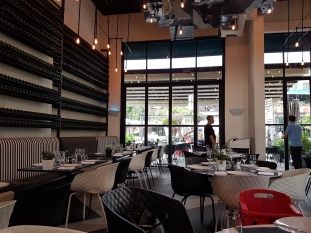 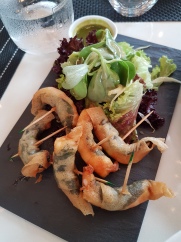 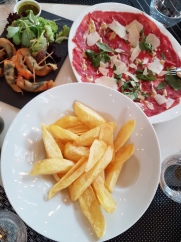 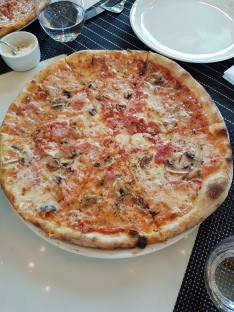 We decided to try a new restaurant at The Village instead of going to our usual destination there. TOTO is an Italian restaurant that has an ambitious menu, so it seemed promising. Unfortunately, it fell short of our expectations. We ordered the crunchy shrimp with a basil leaf hugging it on the inside; that was tasty. As another entree (in the French sense of the word), we ordered the beef carpaccio which was also good. I think we should have stopped there because the rest of the meal was lacking. The positive aspect of the pasta dishes was the fact that the cuisson was al dente; I do not understand why that is so difficult to achieve in all Italian restaurants. Zooming in on the shrimp pasta dish, the addition of courgette chips was nice to look at. However, the crunchy factor in the “chips” was absent, and they lay limply on the linguini. Moving on to the pizza, the toppings were flavorful, yet the dough was soggy and chewy. The pizza I ordered according to the menu had no mushrooms, but when it arrived the fungal constituent was sitting there smugly. When I told the waiter about the issue, he said that I was right and if I wanted them to make a new one they would. That is still unacceptable because the menu would still be misleading, and some people may even have an allergy to mushrooms. Another unacceptable matter was that two items I asked for on the menu were unavailable, and the reason for this was that apparently they are changing menus soon. Honestly, I do not see why the current menu should be incomplete because a new one will replace it; they really should have been better prepared for a smoother transition. Now, we get to the dessert, I ordered the pain perdu. When I first saw it, I thought it was interesting that they had placed chocolate in the middle; they were trying to make their own pain perdu stand out among the others. Well, it did stand out, in a negative way. The bread was soaked in an overwhelming amount of butter and oil; just remembering it makes the blood in my veins and arteries clot. I could not make myself eat more than two spoons of it because it was so disturbingly heavy. The only thing that could be eaten on that plate was the ice cream, which was not enough to redeem the dessert in any way. Next time I go to The Village, the usual stop it is.

View all posts by Salted Caramel